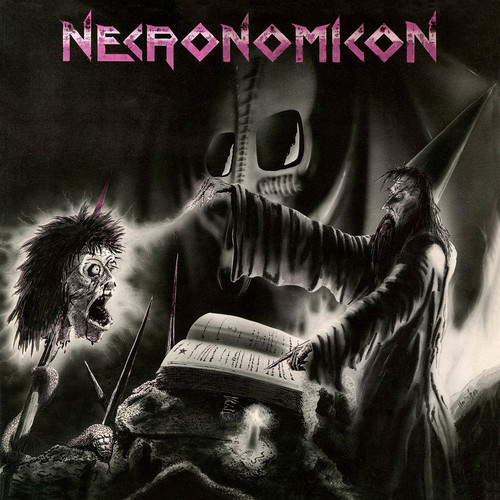 Kreator, Destruction and Sodom. All three are German Thrash Metal legends. So far, so good. But what about a band called Necronomicon? Never heard of them? Well, life could have been so much different. If, yes, if Necronomicon had had the same luck as the above mentioned three in signing a deal with one of the prominent German labels back in the mid-1980s. But instead of securing a deal with Steamhammer (like Sodom and Destruction), Noise (Kreator) or even Roadrunner, Necronomicon ended up with the little known Wave Records (a sublabel of Gama Records). Necronomicon was founded in late 1984 but their self-titled debut did not hit the shops until 1986. Their debut album, nowre-released on High Roller Records, is by many fans still regarded as one the greatest German Thrash Metal records in history. "We were 100% authentic on this record", muses guitarist/vocalist Volker Fredrich (aka Freddy). "We recorded the album within three days. We were not thinking about mistakes at this stage. We cranked up the amps to 11 and went for it." After Â»NecronomiconÂ« the band issued three more albums (Â»Apocalyptic NightmareÂ« in 1987, Â»EscalationÂ« in 1988 and Â»ScreamsÂ« in 1994) before splitting up. Necronomicon returned in the new century with three more albums (on various labels). With songs such as "Possessed by Evil", "Bloody Revenge" or "Blind Destruction", the true classic, however, remains their first album recorded in 1984 and originally issued in 1986. "Necronomicon was loved internationally", reveals Freddy. "Especially in all Scandinavian countries, the United States of America and South America. We got fan letters on a daily basis."
back to top